My interest in psychotherapy began in 1992 during a year long trip to India. Whilst there, I became intrigued by the connections between western philosophy/ spirituality and eastern mysticism and the wisdom they offered. On my return from India, I trained as a social worker and worked as a children and family's social worker for four years. I moved from there to work as a psychotherapist in a Child and Adolescent Mental Health Team, again for four years. In 2003 I moved to work for an independent fostering agency, managing a regional therapy team. Between 2009 and 2013 I worked as the Head of Therapy for a UK wide and international social care agency. From 2013 to 2014 I worked for a charity called Rethink Mental Illness as their Assistant Director for Psychological Therapies. This role entailed the strategic management of their five IAPT services. After this I specialised in working with eating disorders. I worked at Riverdale Specialist Eating Disorders Hospital for nearly 7 years as their Systemic & Family Psychotherapist, offering family and/or couples therapy to patients and their parents/families/partners as appropriate. Riverdale Grange offers inpatient treatment to both adults and adolescents who have been referred by the NHS for support with recovering from an eating disorder.

Currently, I am employed as the Service Lead and Psychotherapist at the NHS Sheffield Relationship & Sexual Service, also know as Porterbrook.

I also run a private practice which is described in this website.

I am an experienced psychotherapist and have been registered with the UKCP since 2000. I initially trained as a Gestalt Psychotherapist, going on to complete a post-graduate diploma in systemic practice in 2003. In 2019 I completed the MSc in Systemic and Family Psychotherapy at Leeds University and am now a qualified Systemic and Family Psychotherapist. I have also been taught to use cognitive behavioural methods and attended a 3 day training course in CBT. I use a range of approaches and techniques in my work, continually assessing which is likely to be most beneficial for each particular person with the difficulties they are facing.

I have written papers and a book and had these published as listed below:

• 2006 ‘Team Parenting: a Web of Integrated Theoretical Perspectives and Approaches in Foster Care’ in CONTEXT (the magazine for Family Therapy & Systemic Practice).

• 2013 'Team Parenting for Children in Foster Care - A Model for Integrated Therapeutic Care':

How can professionals work together with foster carers to create stable and therapeutic foster placements? Team Parenting Children in Foster Care describes a unique model of supporting children in care which involves foster carers and professionals working together in the best interests of the child. This book lays out the key principles of Team Parenting - to meet the needs of troubled young people in an integrated way and incorporate therapy within a wider team of social workers, therapists, psychologists and foster carers - as well as the theory behind it and interventions used. It details how the approach contributes to the recovery of looked after children and each chapter includes examples that illustrates how Team Parenting works in practice. Team Parenting in Foster Care includes ideas for systems and individual practice that will inform and improve foster carers' and professionals' work in any setting.

I have in the past taught at SPACE (Sheffield Psychotherapy and Counselling Education), delivering the Attachment, Complex Trauma and Brain Development units on the Human Development module. I have also spoken at conferences and run training events for Local Authorities on Team Parenting.

Admin
If you would like to arrange an initial session or contact me about any of the other services mentioned in these pages
please email me jeanette.caw@gmail.com

I practice within Sheffield from a venue in S7. 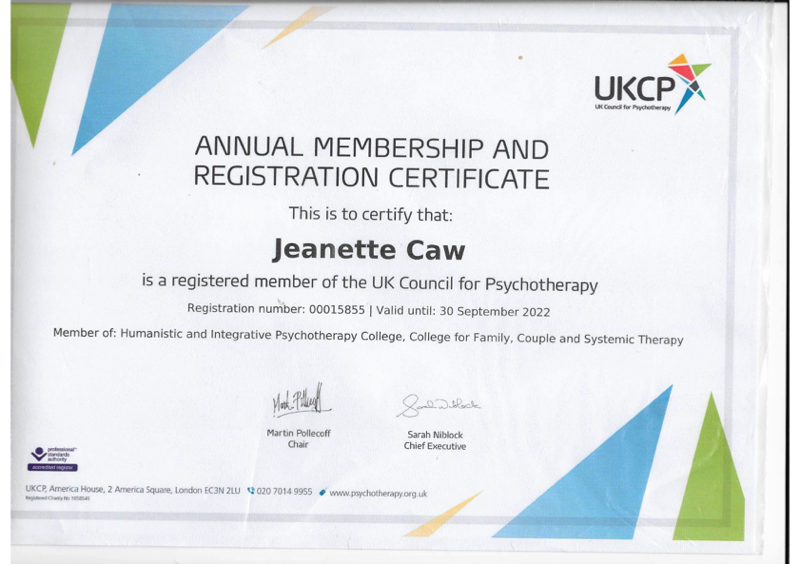